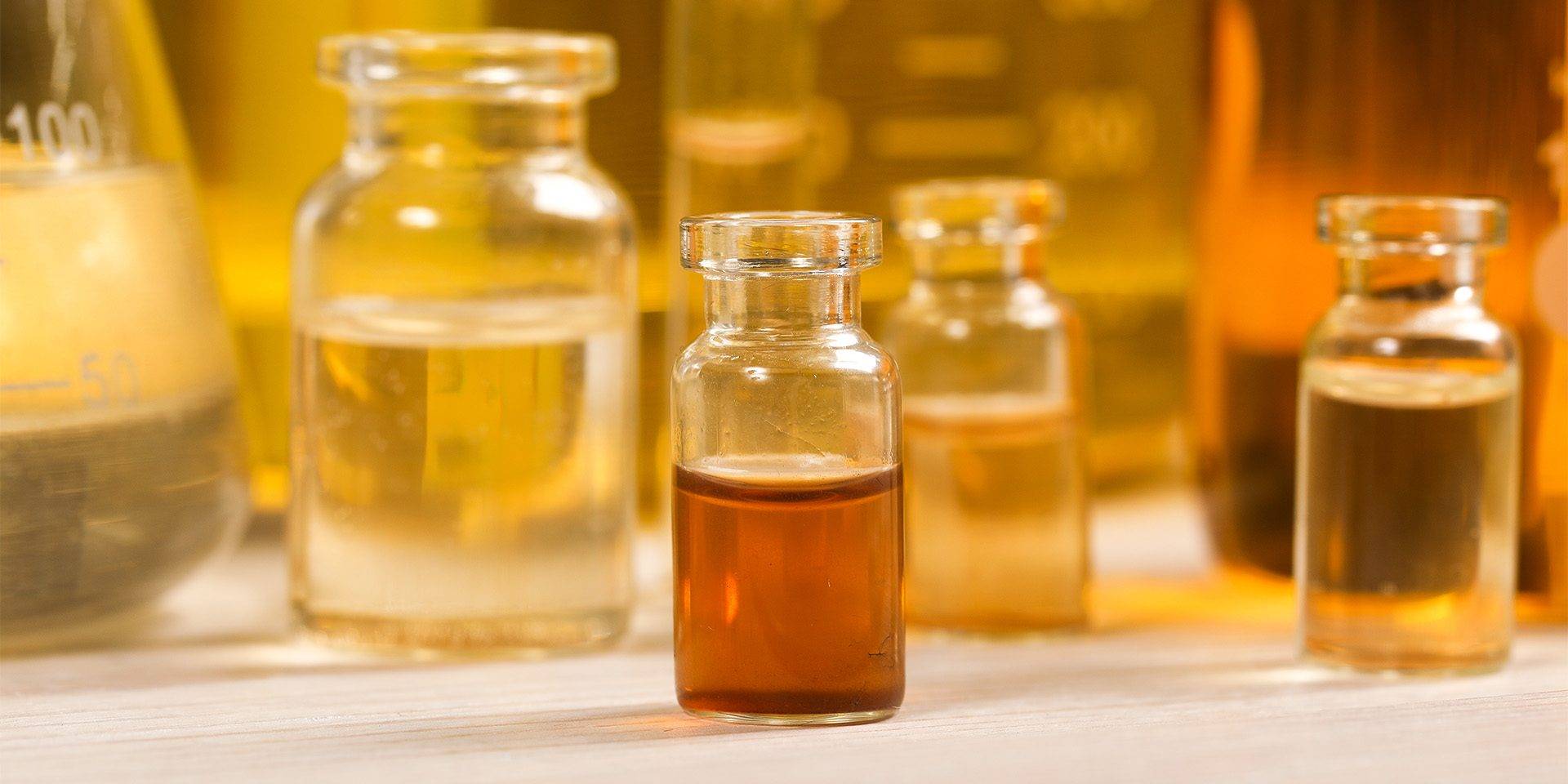 What Are Essential Oils?

Essential oils are aromatic compounds pressed or steam distilled from raw plant materials. They are called essential oils because they contain the ‘essence’ of the plant and all of its skin-enhancing properties.

Some oils are sourced from multiple species but labeled under one common name. For example, Sandalwood has more than five different species variations, including Santalum album (Indian Sandalwood), Santalum spicatum (Australian Sandalwood), and Santalum paniculatum (Hawaiian Sandalwood), each with different chemical compositions and therapeutic benefits. 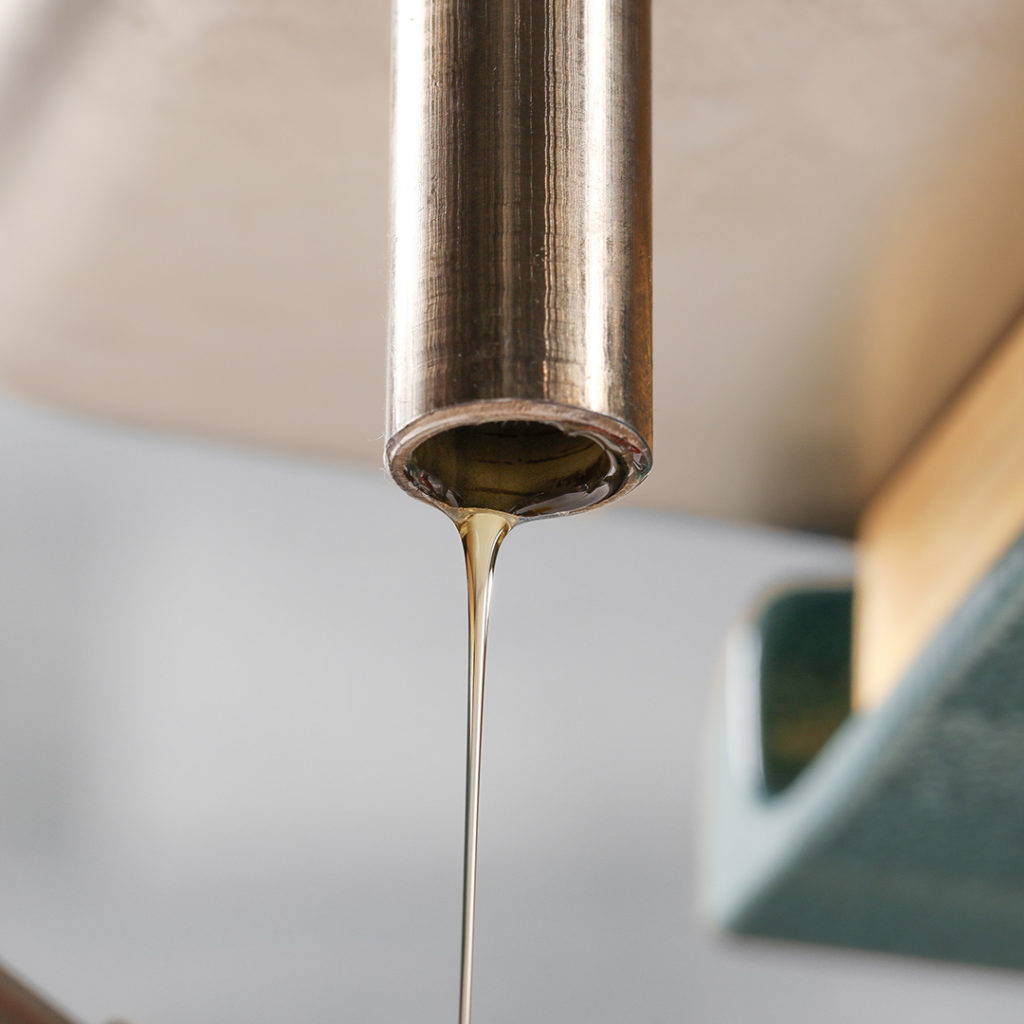 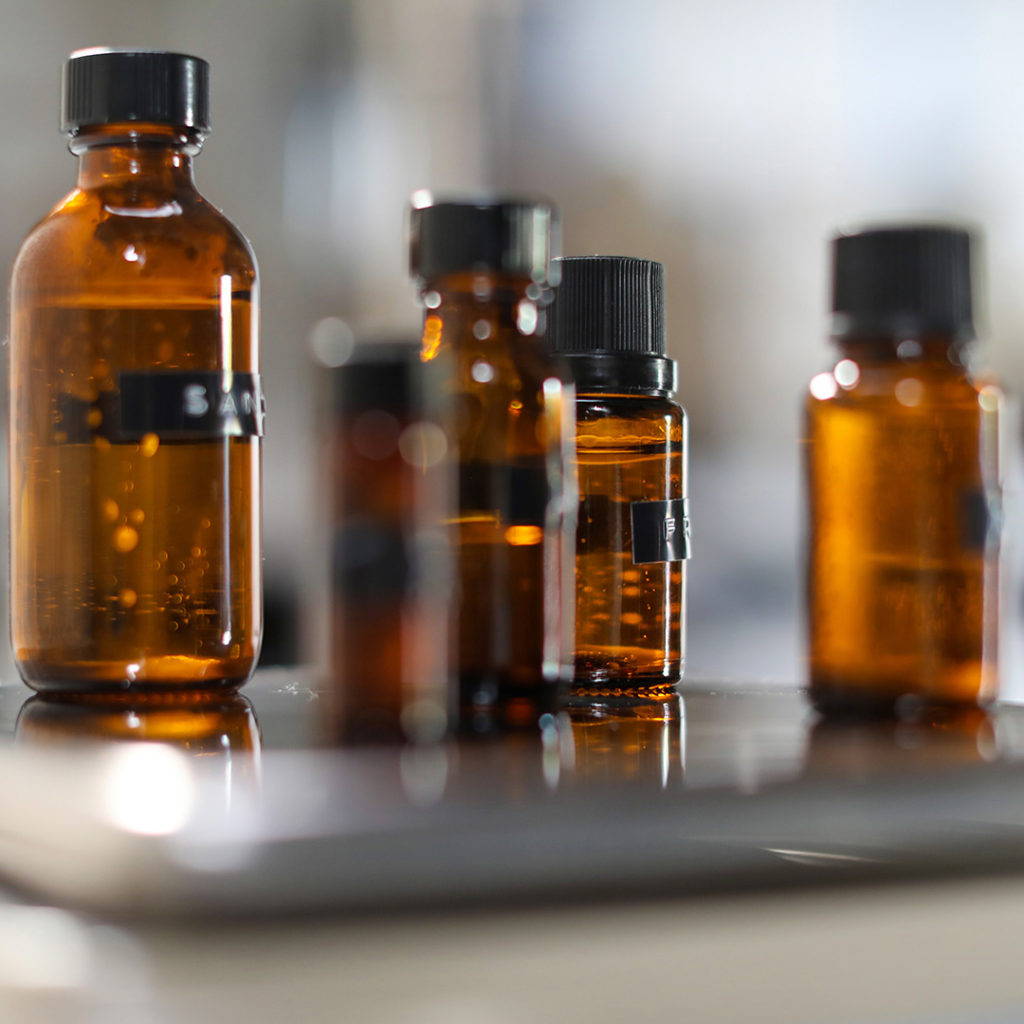 How Are Essential Oils Obtained?

Steam distillation is the most common technique for extracting essential oils and involves steam passing through the plant material, which is vaporized and then condensed into a liquid.

Solvent extraction is performed using a chemical solvent, such as ethanol and hexane to draw oil from the plant material. After the plant material is treated with the solvent, it produces a waxy compound, which gets mixed with alcohol to release the oil particles.

This method produces what is called an ‘absolute,’ which has exceptional fragrance, however, the solvent chemicals remain in the oil, so absolutes are better used for fragrance rather than skincare.

When choosing an essential oil, it is vital to be aware of the farming methods used to produce the plants from which the oil is extracted. Essential oils are incredibly concentrated, and trace amounts of pesticides, synthetic fertilizers, or GMOs can remain in the oil. It is best to choose certified organic oils or those labeled as ‘cultivated without chemicals.’

Essential oils are a natural resource, and sustainability is a significant factor when sourcing. Some wild-grown essential oil-bearing crops are the target of overharvesting, such as Rosewood and Spikenard. Cultivated farming of over-harvested crops allows the wild populations to regrow; always choose oils that come from sustainable farming practices that do not disrupt the wild population. 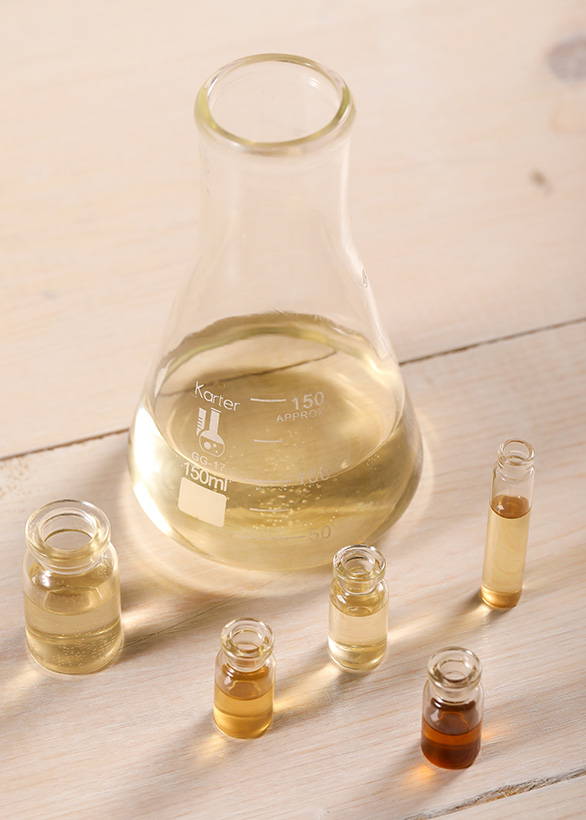 Essential oils are composed of a wide variety of chemical compounds that are divided into 7 general categories: Alcohols, Aldehydes, Esters, Ketones, Phenols, Oxides, and Terpenes.

Alcohols are antiseptic, anti-viral, and regarded as non-toxic to the skin. Common sources are Rose, Geranium, and Chamomile oils.

Aldehydes are anti-infectious but are very reactive on the skin. They are generally found in citrus oils, which are best to avoid in facial skincare products.

Esters are anti-fungal, calming to the skin, and abundant in Lavender oil.

Ketones stimulate cell regeneration, but some forms are known to irritate the skin. Thujone is considered the most caustic ketone and is found in sage and wormwood. Other ketones, such as Jasmone and Fenchone, found in Jasmine and Fennel, are considered non-toxic and safe for use on the skin.

Phenols are antibacterial, antiseptic, and incredibly stimulating, but can be very irritating to the skin at high levels. Examples of potent phenols include Clove, Cinnamon, Thyme, and Oregano. Oils with a high phenol content should be avoided in general skincare.

Oxides are compounds fused with oxygen molecules and are antiseptic and purifying when diffused in the air. They are better used for that purpose rather than topically in skincare. Common oxides include Eucalyptus and Rosemary.

Terpenes make up the largest group of compounds and are anti-inflammatory, antiseptic, antioxidant, and detoxifying. They are found in various forms in most essential oils, particularly in conifer plants. 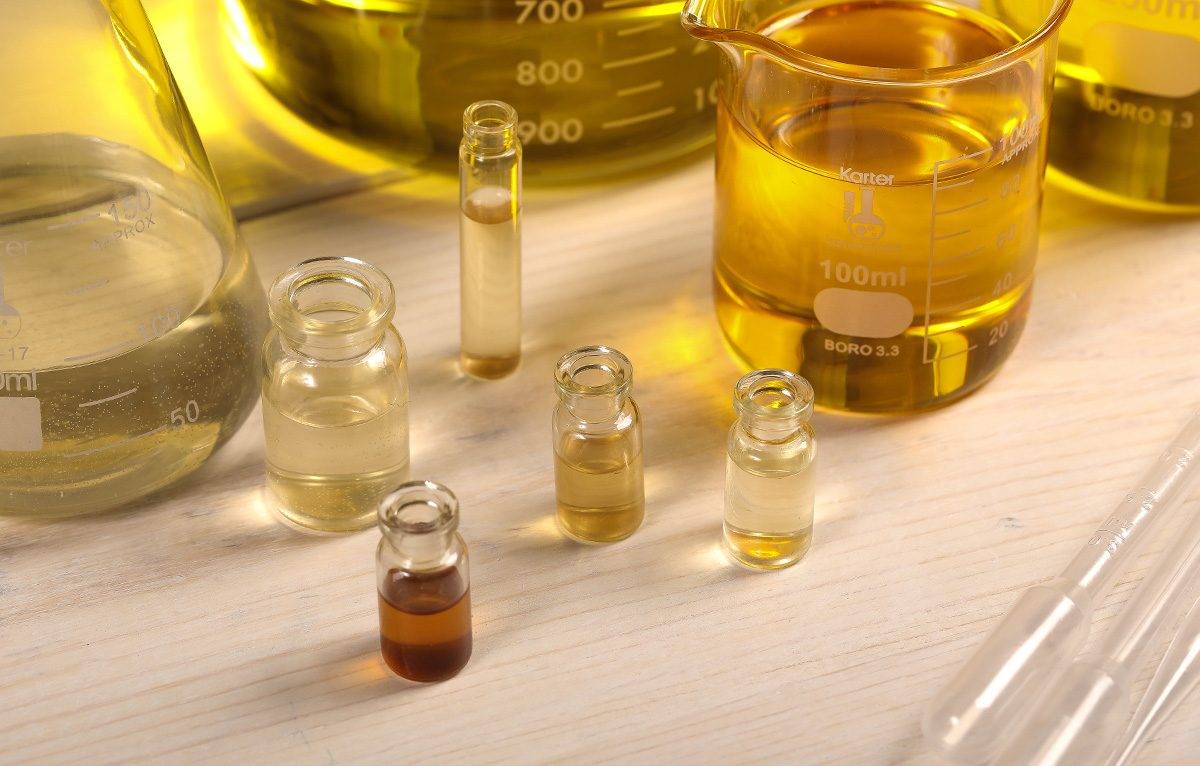 How Do Essential Oils Benefit The Skin?

Every essential oil has a unique composition that supports different skin functions; however, they all generally have qualities of cleansing and rejuvenation. Their molecule size is incredibly small, which allows them to penetrate deep into the skin, delivering their healing benefits.

When using essential oils on the skin, it is important to be aware of the chemical composition to choose the oils that will safely treat your skin and avoid those considered irritating.

With two exceptions (Lavender and Tea Tree oils), essential oils should never be applied directly to the skin; they will cause irritation due to their potency. Essential oils should always be diluted in a carrier oil between 1 and 2 percent for topical skincare use.

Photo-toxicity is an adverse reaction that occurs in the skin when a substance is applied and exposed to UV light (daylight). Certain essential oils contain a compound called Furanocoumarin, which is highly photo-toxic and causes redness, hyperpigmentation, and inflammation in the skin.

Furanocoumarin is considered a photo-carcinogen, and should be avoided in skincare. Oils that contain Furanocoumarin include Bergamot, Lemon, Lime, Grapefruit, Bitter Orange, Mandarin Leaf, and Angelica Root. 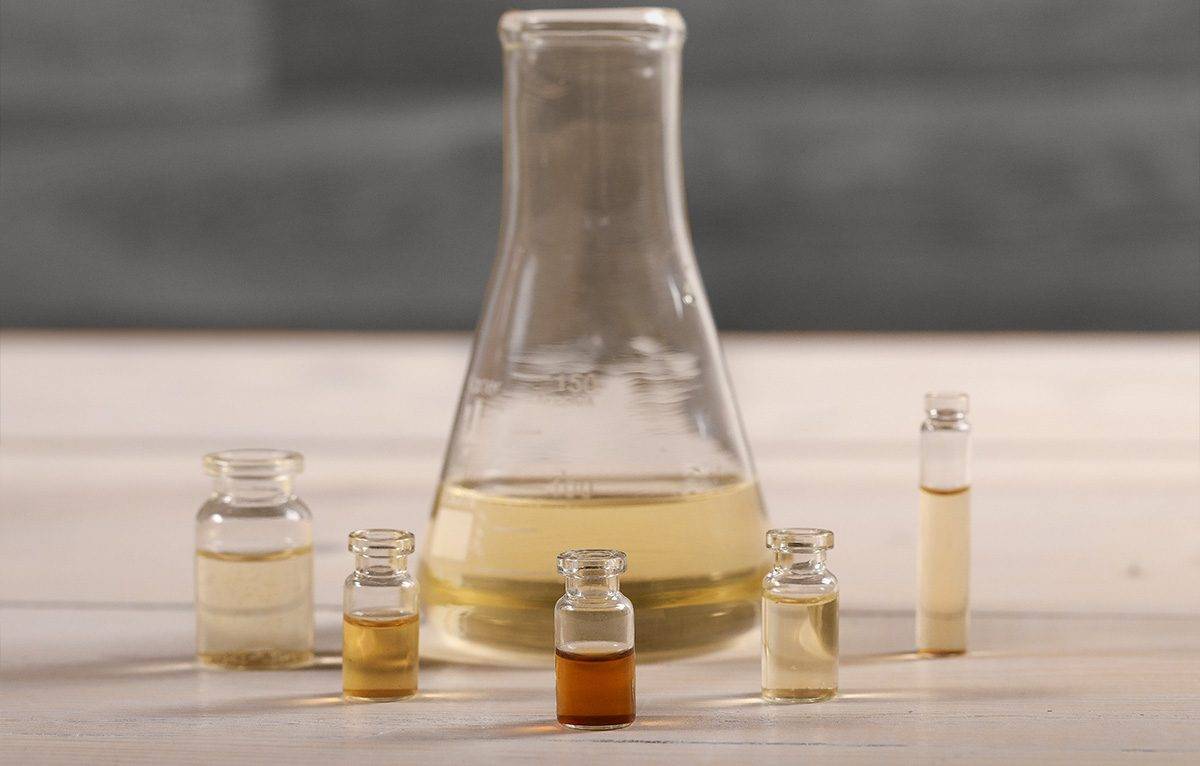 We use five essential oils in our Flora Mirabilis FACE OIL formula; Sandalwood, Frankincense, Lavender, Rose, and Oud. These oils are particularly beneficial for treating the skin. They are anti-inflammatory, antiseptic, detoxifying, and promote cell regeneration, giving skin a clear, healthy, revitalized appearance.

We use sustainably and ethically sourced Santalum album (Indian Sandalwood). This is the best species for skincare as it contains the highest levels of Santalol- a terpene compound responsible for clarifying and brightening skin.

Frankincense is another oil that comes from a variety of species. We use Boswellia serrata, Indian Frankincense, the species that contains the highest levels of the terpene Boswellic acid, which helps even out pigmentation.

Our Lavender comes from a unique source- the flowers are grown at a high altitude, which changes the oil composition slightly from standard Lavender oil. The high altitude grow produces lower levels of camphor, a regenerating ketone, which makes it incredibly gentle and soothing to the skin.

Because it is much less expensive, many products contain Rose absolute instead of Rose essential oil. However, these two ingredients are not interchangeable. We use true Rose essential oil, steam distilled from Damask rose petals in our formula to ensure its safety on the skin. Our Rose oil contained a mild phenol called Eugenol that has a gentle, astringent-like effect on the skin, which helps to minimize the appearance of pores.

Our Oud is steam distilled from the resin of sustainably sourced Agarwood trees. This rich, resinous oil contains many antioxidant-rich terpenes which work to purify the skin.